Prior to the recent announcement of Dick Cook Studios’ $500 million dollar deal with China’s Film Carnival, I had the pleasure of attending the China-U.S. Motion Picture Summit on March 25th in Grand Epoch City (Beijing’s Hebei province neighbor), co-hosted by Dick Cook and showcasing an ensemble of Hollywood heavyweights.

The speakers were welcomed by Beijing Film Academy Vice Dean Sun Lijun during a pre-summit luncheon in the BFA’s “Movie Story” restaurant. 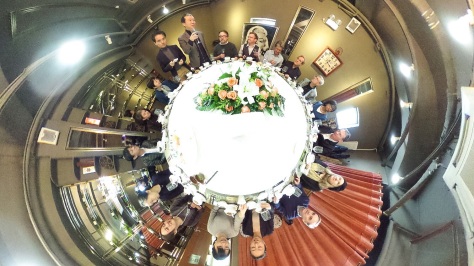 During lunch, I had the opportunity to catch up with my old friend and mentor, legendary Disney producer Don Hahn (THE LION KING, BEAUTY AND THE BEAST), and also to share observations on China with Bruce Hendricks, President of Production at Dick Cook Studios (and fellow Disney veteran). 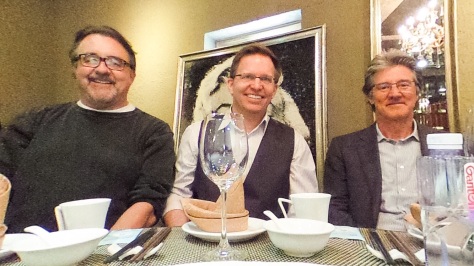 Summit keynote speaker Cheryl Boone Isaacs, President of the Academy of Motion Picture Arts & Sciences, is a tireless advocate of opportunity and diversity in the motion picture industry… and very accommodating of her first 360-degree selfie. 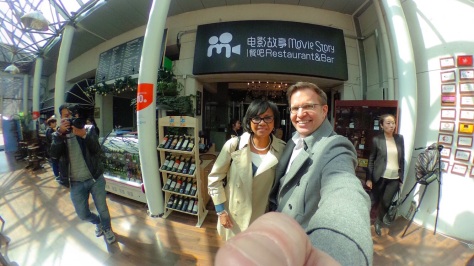 The China-U.S. Motion Picture Summit was attended by a mostly Chinese audience of film industry professionals and students from the Beijing Film Academy, with a few laowai such as myself sprinkled in.  Following are some non-comprehensive notes and photos. 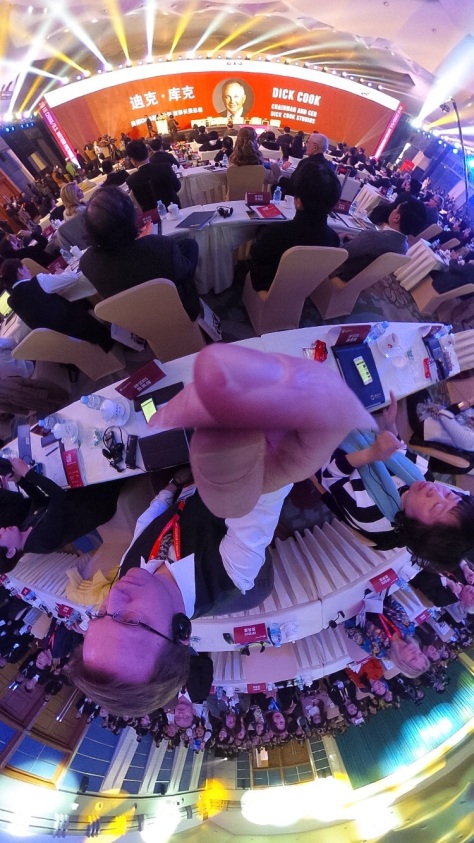 Dick Cook was gracious and affable as always, and kept things flowing smoothly.  Before I departed Disney (the first time) in 2007 to pursue my independent ventures, I embarked on a string of informative lunches with an array of Disney producers and executives.  Don Hahn was the first person to let me pick his brain over a meal, and Dick Cook was the last – so it was a kick to see them both in China on the same ticket a decade later. 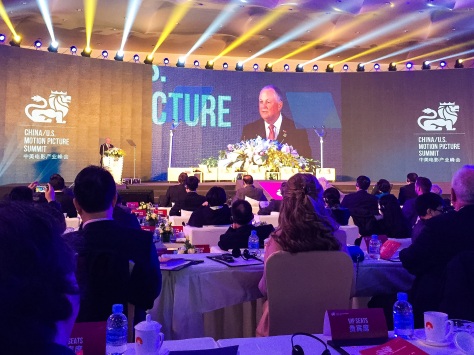 Randall Wallace (BRAVEHEART, PEARL HARBOR) offered heartfelt advice during the “Art of Storytelling” panel, noting that his breakthrough came when he thought his career was over and he wrote something that he thought his descendants would want to see (BRAVEHEART).  My favorite comments from Randall were his observation that “a script that doesn’t surprise the writer will not surprise the viewer” and his opinion that “it’s easier to restrain a fanatic than to resurrect the dead”. 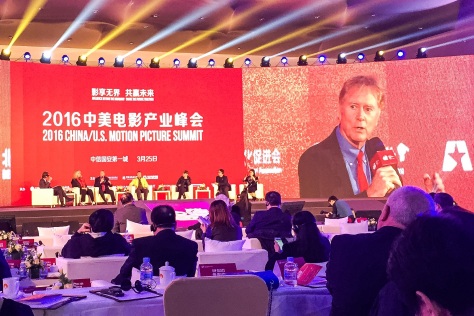 Don Hahn killed it (and earned the only standing ovation of the day) with an inspirational micro master class on the animation creative process.  Characteristic of Don (but unbeknown to most) is the fact that he reformatted his entire presentation the day before, once he got a load of the venue’s panoramic screen. 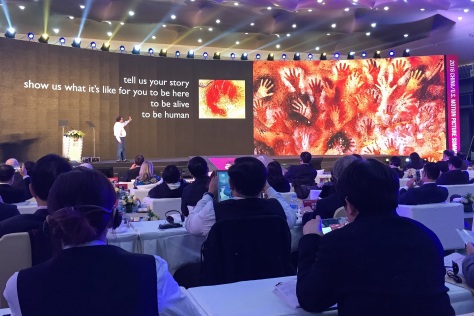 Patrick Frater (Asia Bureau Chief, Variety) did his level best to draw his panelists out during the “Cooperation” panel, but William Feng (VP of Asia Pacific, Motion Picture Association) and his fellows weren’t having it.  So, for those who may be wondering, the answer is “yes”:  China’s booming film industry is rife with problems (and opportunities), and foreign parties hoping to engage it must contend with significant (and shifting) hurdles. 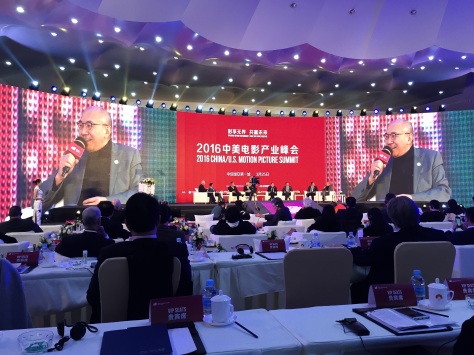 Dick Cook had a chat with his new buddy, Beijing Film Academy Director-General Hou Guangming, during the “Education” panel. 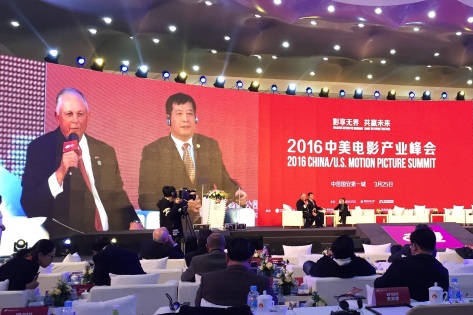 Zhang Xun, former General Manager of the China Film Co-Production Company, had no advice on the “do’s”, but plenty to say on the “don’ts” of Chinese co-productions (memorably citing “82-year-old U.S. flight attendants” as an example of the profound cultural differences between East and West).

Even if you’re not an American screenwriter hoping to pitch your story of an 82-year-old Chinese flight attendant to Wanda, the viability of Chinese co-productions seems bleak, given only 12 in the last 5 years, with decidedly underwhelming results.  Thorny issues abound, creatively and economically. 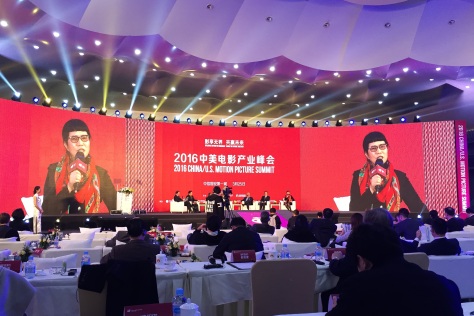 No surprise to anyone, filmmaker Alfonso Cuaron was a big draw – especially on the heels of GRAVITY, a big hit in mainland China (due in no small part to Sandra Bullock being saved by a Chinese spacecraft).

Cuaron was charming and self-deprecating, noting that his primary motivation for making his next film is usually to pay his rent. 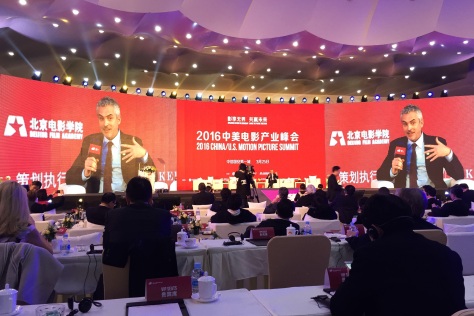 The summit concluded with the “Technology” panel, during which you could feel the disruptive impact that immersive media will have upon the motion picture industry.  Ray Kurzweil’s dictum was prominently cited:  “The greatest change in the history of humanity is the acceleration of change itself.” 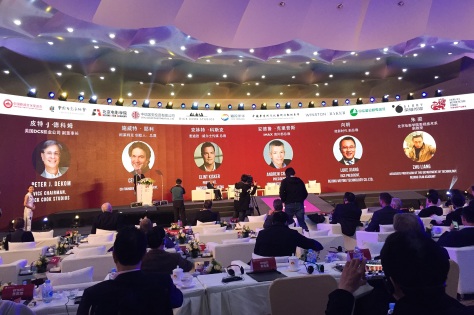 An eye-opener for the foreign speakers was the fact that there are currently over 2,000 location-based virtual reality entertainment zones in mainland China, with a concurrent proliferation of low-cost consumer VR hardware. That most Chinese players are currently obsessed with manufacturing the bottles rather than cultivating the wine indicates an area of opportunity for immersive content creators.

IMAX stands to be hit particularly hard (IMHO), and needs to radically re-examine their business model instead of wishfully clinging to “large screens and lasers”.  What happens when home VR can replicate immersive, communal theatrical experiences – complete with an adjustable level of simulated audience response, from “sedate” to “raucous”?

(If anyone from IMAX is upset by this observation, hold a company retreat, write “IMAX goes under and nobody misses us.  Why?” on a board, use the subsequent discussion as the foundation for a revolutionary strategic plan, and thank me later.) 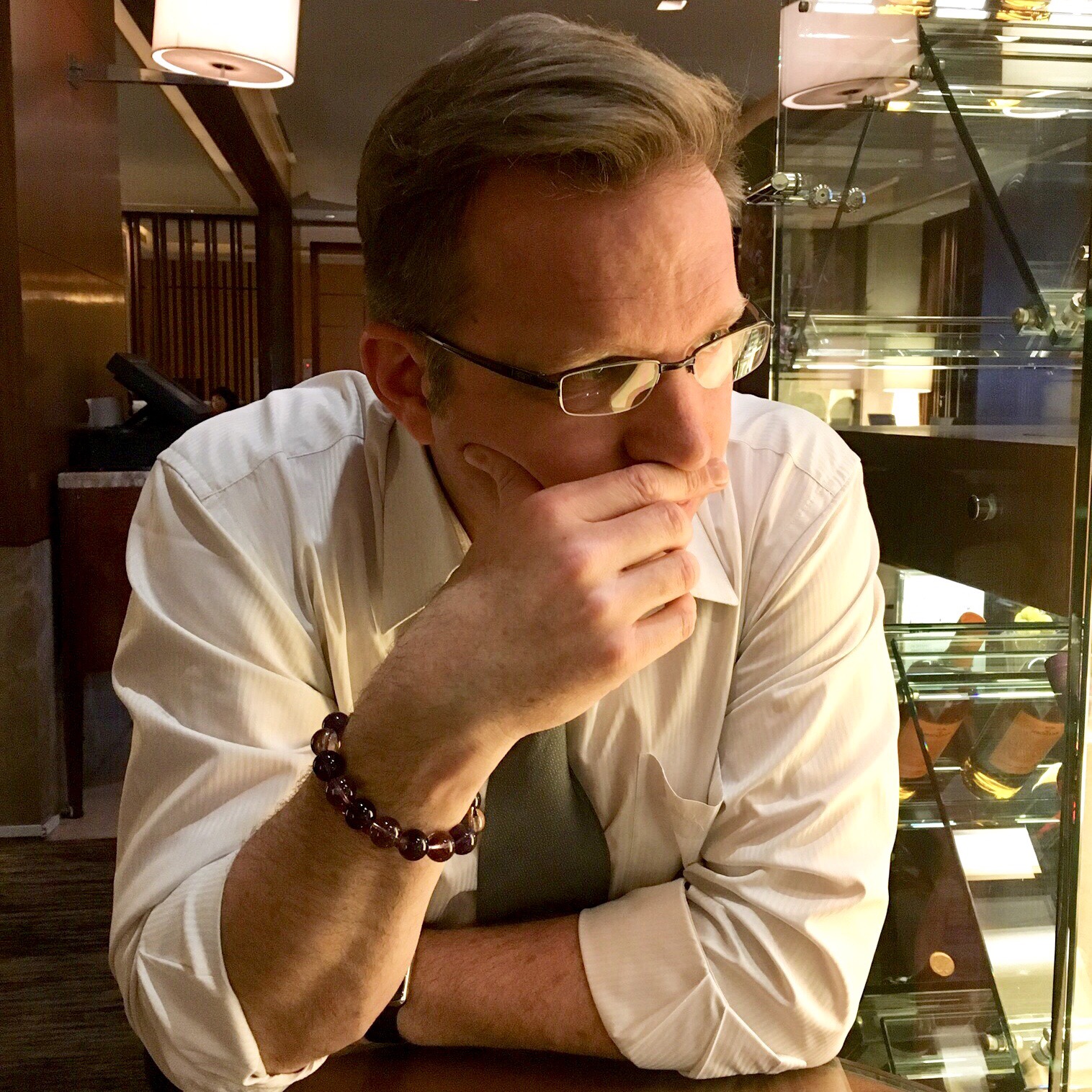 Kevin Geiger has over three decades of experience in the arts & entertainment, including 15 years with The Walt Disney Company in Burbank and Beijing as an animation supervisor and creative executive. Kevin was an instructor at Cal Arts, Distinguished Professor & Acting Vice Dean of the Beijing Film Academy’s Digital Media School, and Executive Director of the Beijing Film Academy’s International Animation & Virtual Reality Research Center. He develops animated features and immersive media as a founding partner of Magic Dumpling Entertainment, creates children’s books as the owner of Peewee Frog, and is exploring the future of AI entertainment with Neural Stew. www.kevingeiger.com